We’re back, with another charity anthology review! Today we’re continuing our look at the Ian and Barbara anthology, Mild Curiosities, with two entries in Chapter III, the post-Doctor era: Comfort in Tea and Tales of Time Travel, by Dana Reboe; and Logan Fairchild’s The Peculiar Package.

As always, there will be spoilers ahead! I do this when reviewing charity projects, because these projects are generally only available for a limited time or in limited quantities, and because they get little in the way of documentation. Although I would not give the text away for free, I believe these stories deserve to be remembered, and also to be catalogued and accessible in some way. Therefore, I include plot summaries, which are naturally heavy in spoilers. (But don’t let that stop you from buying the anthology and appreciating the work firsthand! Purchase link is at the end!)

With that said, let’s get started! 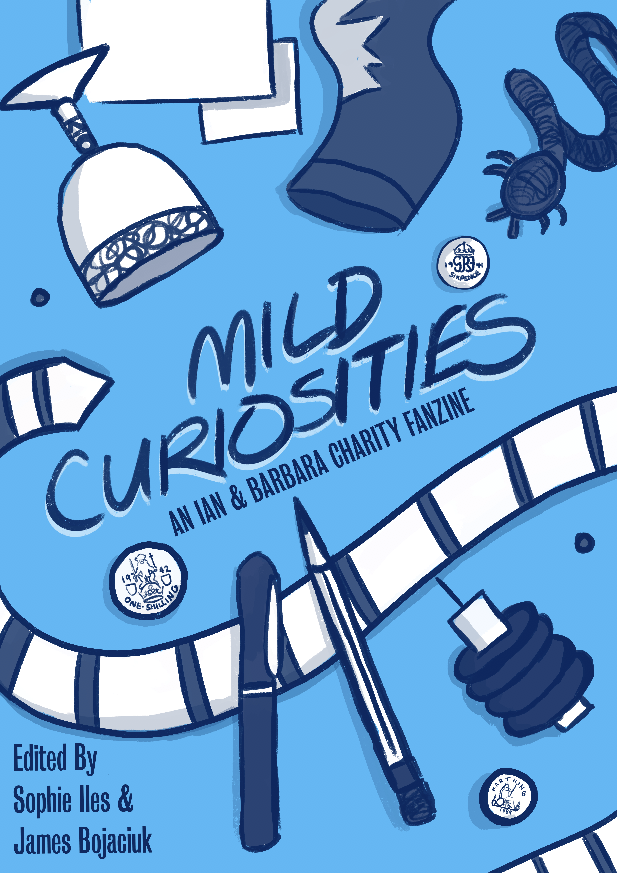 Comfort in Tea and Tales of Time Travel

After two years of trying—give or take; with time travel, who can tell?—Ian Chesterton and Barbara Wright have made it home. The problem is: What to do now? Sometime shortly after their return, the duo sit in Barbara’s flat, just taking it all in. It’s been a stressful transition—of course it has—but here they are, at long last, sipping drinks and enjoying the peace and quiet. After all, those are things they rarely experienced with the Doctor; adventure, action, and even outright terror were more the order of the day. This is so much better.

Therefore, it comes as a bit of a surprise when Ian asks Barbara if she is happy.

She is taken aback; of course she’s happy, right? This is what they wanted. She turns the question back to Ian; and as always, his answer is a bit layered. Of course they’re happy; but, what about the Doctor? It was quite a blow to him when Susan left, and now they’ve followed suit. Will he be okay? To put it another way, though they wanted this for years, was their leaving a bit premature?

Barbara spends a moment musing about her time in the TARDIS—specifically, an early moment, in which she sat in the open doorway of the ship and looked out at the stars, with nothing beneath her feet but the vastness of space. What a view! It brings back all the longing, the curiosity, the sense of wonder she has felt—and yes, she is forced to admit, she too will miss the Doctor. So will Ian, obviously. After all, who will challenge the Doctor’s technobabble? Who will argue right and wrong with the old man?

It all begs the question: Will they see him again?

They don’t know. There’s no way to know.

But—and here Ian joins Barbara at the window, looking out over a bustling London morning—the world is still turning, and the two of them still carry on. There’s something satisfying about that. Despite what they’ve given up, they have each other; and if they are now on the slow path through life, rather than the highlights, well…Ian doesn’t mind. Barbara, either.

It’s been some time since Ian and Barbara found their way back to 1965 London, and they’ve begun to settle in. More to the point, they’ve finally found time to make their relationship something more than just friends or traveling companions; and so, while Ian is away for the weekend with family, Barbara finds herself unexpectedly at loose ends.

She doesn’t have long to think about it, though; for a mysterious package has arrived in the post. Inside, she finds a strange, handheld device, made up of a screen like those on the TARDIS, surrounded by a large number of switches and buttons. Intrigued—and a bit worried at the obviously alien nature of the machine—she spends the rest of the weekend tinkering with the device, but to no response. When Ian returns (with romance on his mind, but unfortunately he’ll be redirected in a moment), she enlists his help with it. He spends the evening working with the device, but also gets no response; in the end he falls asleep on her sofa.

During the night Barbara awakens—and spots a strange light from the room where Ian is asleep. She knows at once it’s the device, and with a sinking feeling she moves to check it out. When she picks it up, however, she is shocked to see the Doctor and Vicki on its screen!

It quickly becomes apparent that she can’t only see them; they can see her, and speak with her. They tell her that the device is a telepathic communicator—just in case Ian and Barbara ever need the Doctor for anything. However, he congratulates her on their engagement, confusing Barbara; they’ve never discussed marriage yet. Vicki realizes what has happened, and chides the Doctor for calling too soon. The Doctor retorts that perhaps he isn’t early; perhaps Ian is late (conveniently ignoring the fact that it’s the preoccupation with his own gift that has distracted both Ian and Barbara!). Just before he cuts contact, he warns Barbara not to check Ian’s jacket pockets.

In the morning, Barbara tells Ian about the call from the Doctor. Feeling emboldened, she includes his congratulations on their engagement. Ian, quickly chagrined, produces a ring box from his jacket pocket, and apologizes, saying that he intended to propose on their now-canceled date last night.

And of course, Barbara’s answer is “yes”.

I’ve placed these two stories together in part for a reason of my own—that is, that I’m falling further behind in this series, and need to catch up. However, I also observed that the two stories go very well together, almost as chapters in the same story. Comfort in Tea and Tales of Time Travel (hereafter abbreviated as Comfort for convenience’s sake) takes place very shortly after our heroes’ arrival back on Earth; it’s broadly hinted that it takes place on the night of the same day in which they arrived, but I have left that open to interpretation, chiefly because of the insinuation in our last story that their flats may no longer be available to them. Here we see Barbara’s, so I’ve chosen to allow for the possibility of a little more time. The Peculiar Package takes place some time later, possibly months, but still not too long thereafter. Ian and Barbara have moved forward with their relationship, and here we see one account of their engagement (there may be others in existence, I’m not sure). I’m stating that I think this story is only a few months after their return, because that is in keeping with Hunters of the Burning Stone, which recounts their wedding; that story has them encountering the Eleventh Doctor after being kidnapped from 1965, indicating that not too much time can possibly have passed before their wedding.

These stories are more of the slice-of-life variety. There are no villains, no adventures; only good feelings here—after all, the first story’s title begins with Comfort. That’s fair enough for now; after all, they’ve only just come off of two years of adventures. I will be happy to see more adventures later if possible, but for now, this is all we—and they—need. Put another way, all they need is each other and time—and that’s time in linear order, as we must clarify.

I know this is quite fan-service-y, for lack of a better word; but I love the suggestion that The Chase was not the end of their encounters with the Doctor. They don’t need to come back for constant adventures; but just to know that they weren’t abandoned to their own devices forever is nice. We got a hint of that in The Wreck of the San Juan de Pasajes, with the Seventh Doctor; and there will be other stories down the road. It’s comforting to know that in a pinch, they still have access to their old friend, as we see here.

Overall: Two short stories that accomplish exactly what they set out to do: They set our heroes on course for a happy, if Earthbound, life. I’m content with that. In our upcoming entries, we’ll see if it lasts.

Next time: We’ll wrap up this chapter with Riviera Refuge by Stephen Hatcher! See you there.

Mild Curiosities is published in support of Breast Cancer Now, the UK’s largest breast cancer charity and research organization. You can learn more about them here. The anthology can be purchased in digital form here for a limited time.