We’re back, with another Big Finish Doctor Who audio drama review! Today we’re concluding our examination of the early Short Trips anthologies with the Eighth Doctor’s contribution to the Short Trips, Volume IV collection: Quantum Heresy! Written by Avril Naude, and read by India Fisher, this story features the Eighth Doctor traveling companionless. Let’s get started! 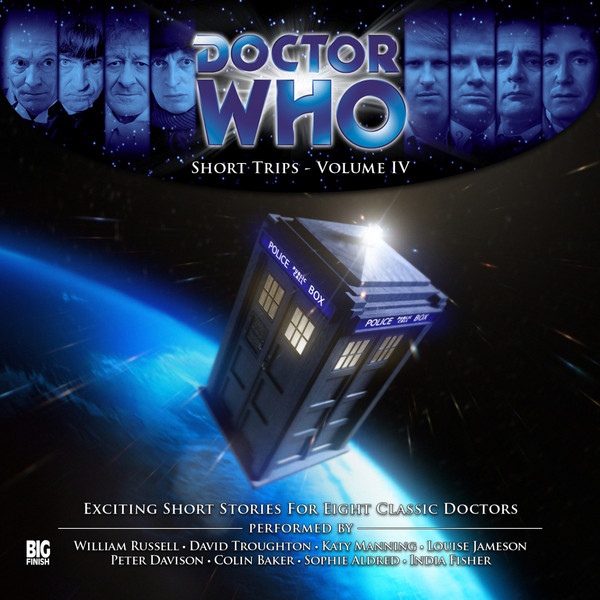 Spoilers ahead for anyone who has not listened to this audio drama! For a spoiler-free review, scroll down to the next picture.

A woman with an…oddly loose grasp of time…works in an archive on Earth. All seems well at first; but then she realizes that she is living the same moments over and over again. Later, the strange man called the Doctor will tell her that she is time-sensitive, or else she would never have noticed.

While checking data in the archive, the woman sees the Doctor appear out of apparently nowhere. He seems familiar, and introduces himself as “the Doctor”; then says an odd thing: “Oh, but you won’t have met me yet.” The woman feels increasingly panicked, but she swears she knows him, somehow. He escorts her deeper into the archive, and shows her an old man, shuffling forward, muttering something. Strangely, the Doctor calls the man “it”. The Doctor refuses to let her speak or approach, despite the overwhelming urge to hear what the man says.

Again she is working in the archive, alone in the quiet and dust. She thinks she has always been here. The man called the Doctor approaches, and she remembers him; but when he is gone, she forgets. Perhaps this happens over and over; she doesn’t know. It happens again, and she thinks that she stays because it is her duty. She hears the old man shuffling closer and muttering. She wants to know what he says; but she is afraid. She sees the old man searching for something—and then the Doctor appears, but she does not recognize him this time. He warns her back, and the old man shuffles away. He tells her that time is repeating itself, and even he is caught in it. He says he keeps arriving in this time loop at different points, until he gets it right—and then he vanishes.

The woman works in the archive, checking data, in the dust and the quiet. She thinks of the Doctor as she eats her lunch, and he appears, looking tired and worn. He asks for something to eat, and she offers him her lunch. He laments that he can’t seem to break the time loop—and then he realizes she remembered him this time. She says that he told her it was vital that she remember.  He doesn’t seem to know that, but is cheered by the news. Still, she thinks she has forgotten something. He asks if she remembers the old man—and the loop resets.

She works again. She knows now that the loop exists, and the Doctor is real—but not here. Her time sense awakens, and she realizes the days are not identical. She thinks of the old man, and the Doctor’s warning to avoid him. But would hearing him help or hurt? She is not even sure who she is.

She is no longer checking data storage, and the archive sits in its dust. Is any of this real? The old man passes by, and seems worse than before. Her compulsion to hear him is much stronger. The Doctor appears and breaks the spell again. She wonders not who she is, but what.

Another loop. She longs to be free, and is angry over it. It feels as though time has stopped. She calls out for the Doctor, and she hears his voice, now dry and cracked. He tells her it’s time—he has worked it out, and she has remembered. The time loop is an experiment. The old man is no man at all; he’s a creature from another dimension, trying to push through. And the woman…she WAS the experiment. She was created from raw matter, but has become a living person. The old man wanted to control her so as to manipulate the Doctor’s reality. But she resisted—and the experiment failed. She sees the old man, and he looks like a hole in reality. It burns and dies in front of them. The Doctor says that had she approached it, it would have granted the creature control—and she would have died.

The archive is not real, and it begins to crumble around her. She tries to hold on—but the Doctor assures her she is part of real reality now, and she can break free. So, she does.

It has always seemed to me that the Eighth Doctor era—having lacked a television series to set its tone—has become the dumping ground for the most weird and bizarre and—to borrow the Tenth Doctor’s term—timey-wimey stories in the DW canon. One need only to look at Zagreus (which I haven’t covered yet, but have heard enough about) to know that that is the case. His stories push the limits of time travel and dimensions and universes and his own lifespan and nearly any other fantastic aspect of the series.

This story, while hardly the most large-scale or dramatic, fits right in. It concerns a time loop—standard fare by itself—that is more than it seems, and gradually reveals an otherworldly creature (villain? By default, I suppose, but we don’t get very far into that aspect) trying to break into reality, as well as an artificial lifeform that becomes real. Pinocchio ain’t got nothin’ on this story, friends. Being a story of a time loop—but with the Doctor dropping in at non-sequential points—the story is told in non-linear fashion. Sometimes, as with Creatures of Beauty (which I recently covered), that can become a problem, as the story gives itself away too early. Here, I think it’s saved by the fact that it’s essentially a bottle episode; there are very few characters, in a very contained environment, and we’re only seeing the story from one character’s perspective, which is subject to the rules of the time loop. Thus, we don’t get the ending spoiled before we get there, despite the non-linear structure. That’s a rare combination of factors indeed, but it works here.

The Eighth Doctor is traveling alone, but that does little to establish when in his timeline the story takes place. If we got a good description of his hair or clothes, it might narrow it down; but the point-of-view character has other, more pressing concerns, and doesn’t oblige us. As is typical in these anthologies, there are no continuity references (we don’t even see a sonic screwdriver!), and that further obscures any attempt to place the story. Being a bottle episode, that’s just as well, I suppose; it doesn’t NEED to have any bearing on any other stories. As with past Eighth Doctor short trips, India Fisher (of Charley Pollard fame) does the reading; she’s passable and formal, but she doesn’t really attempt to capture the Doctor’s voice or mannerisms. I think that’s acceptable in audiobook format; it’s nice when we can get the different voices, but it’s not necessary.

Overall: A nice story, self-contained in more than one sense, and a decent wrap-up to both the fourth volume and the anthologies as a group. I haven’t always been optimistic about the Eighth Doctor’s short trips thus far, but this one is decent. It’s also short; I didn’t do the math, but I suspect it’s the shortest installment in this anthology. If you’ve made it this far, give this one a listen as well.

And that’s that! When we return, we’ll begin listening to the individual Short Trips, which tend to be longer and more involved—someone recently compared them to the Companion Chronicles, but in short form, and I think that’s an apt comparison. I should note that there’s a significant gap in release dates between Volume IV, published in 2011, and the first single release, published in January 2015. We’ll begin with the First Doctor in Dale Smith’s Flywheel Revolution! See you there.

All audio dramas featured in this series may be purchased from Big Finish Productions. This story’s purchase page is linked below.

This site uses Akismet to reduce spam. Learn how your comment data is processed.